A great one on cartels and their instability 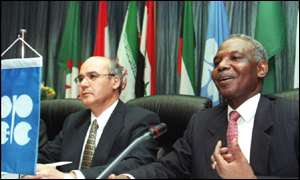 We learn that cartels are unstable structures as each member has the incentive to 'cheat' and sell more than their quota (the agreed amount). That is why cartels can only be found in oligopolistic structures where 'fewness' makes monitoring possible and decreases the propbability that the cartel collapses. OPEC has historically been the most successful cartel. It was founded in 1960 (read here a few interesting historical facts on OPEC).

In this recent (Nov 28) IHT article we read that

For the first time in a decade, oil producers are facing a real test of their unity...

exporters are being pummeled by a triple whammy of lower prices, falling demand and declining revenue. The group, whose members account for more than 40 percent of global oil exports, is desperately seeking ways to stop the drop in prices, which have fallen from their summer peaks at a record pace.

We've seen that cartels are more likely to collapse when demand is falling (or, the other way around, that they are more stable if demand is buoyant - I always liked this use of the word!). Now...

...OPEC is increasingly torn between its moderate members, led by Saudi Arabia, which can afford a period of lower oil prices, and countries with high government spending, like Iran and Venezuela, which have become much more dependent on high prices.

...Instead of coasting on growing demand, producers are confronted with a significantly different environment and must adapt to a world of slowing consumption and overflowing oil supplies. They must also contend with losses of hundreds of billions of dollars in revenue.

The succcess of OPEC largely is the result of the role of Saudi Arabia.

...Even if OPEC agreed to a new cut in production, analysts doubt that all the countries would abide by their quotas, and it would fall to Saudi Arabia to shoulder the brunt of the cutbacks.

...member countries control a much less significant share of the world's total oil supplies than previously. Non-Opec countries such as Russia, Norway and Mexico have ramped up production while new flows of oil fields have been discovered in Africa and South America. While Opec still controls more than half of the world's crude oil exports, the world league of top-10 oil producers now contains just three Opec members. This means that Opec can easily be undermined by non members when it decides to shore up prices by cutting production. (verbatim from this BBC article)

...it makes sense that OPEC members are considering to...

...open consultations with producers outside the cartel, the Iranian envoy has indicated, and could set the contours for a coordinated response by OPEC and non-OPEC producers, including Mexico and Russia. In the late 1990s, Norway and Mexico trimmed their production to bolster oil prices after the Asian economic crisis.

This is an excellent article on cartels and you should all spend a few minutes to read it.

P.S.:I was just checking today's IHT when I saw a new article on the same issue. The weekend meeting ended without much progress. 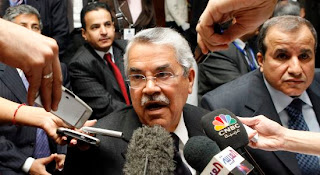 Global growth, the biggest factor for oil demand, is under severe stress, new supplies are coming on the market, oil inventories are brimming, and investors are fleeing commodities.

Overall global oil consumption could drop for the first time in 25 years this year and may not recover before 2011, according to analysts. Some analysts say OPEC needs to cut output by at least 3 million barrels a day to make up for declining demand in industrialized nations.

Meanwhile the credit crisis is hurting the ability of producers to finance new developments, and crimping high-cost producers such as tar sands or deep water offshore, who need prices between $60 and $80 a barrel to be viable. This means supplies could be affected as oil companies cut back their investment spending. If prices keep falling, some existing fields could also become uneconomical, and might be forced to shut down.

(There was a little bit of micro here: marginal costs are obvoiusly notidentical across oil producers: exit would start with the least efficient...)

The newer article (Nov 30) can be read here.
Posted by constantine ziogas at 10:37 AM