From our very own Athinagoras! 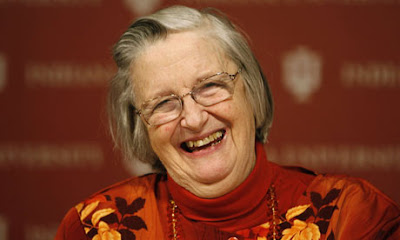 This is another very easy to read piece on Elinor Ostrom's work that was written by Kevin Gallagher (professor of International Relations at Boston University and a research fellow at the Global Development and Environment Institute) for his Guardian column.

The title is 'Elinor Ostrom breaks the Nobel mould'.

In a nutshell, Ostrom won the Nobel prize for showing that privatising natural resources is not the route to halting environmental degradation.

In most economics classes the environment is usually taught as being the victim of the "tragedy of the commons". If one assumes, like many economists do, that individuals are ruthlessly selfish individuals, and you put those individuals onto a commonly owned resource, the resource will eventually be destroyed. The solution: privatise the commons. Everyone will have ownership of small parcels and treat that parcel better than when they shared it.

Many environmental experts also reject the tragedy of the commons argument and say the government should step in.

Ostrom says the government may not be the best allocator of public resources either. Often governments are seen as illegitimate, or their rules cannot be enforced. Indeed, Ostrom's life work looking at forests, lakes, groundwater basins and fisheries shows that the commons can be an opportunity for communities themselves to manage a resource.

In her classic work Governing the Commons: The Evolution of Institutions for Collective Action, Ostrom shows that under certain conditions, when communities are given the right to self-organise they can democratically govern themselves to preserve the environment.

We will be discussing these issues in a few weeks when we start to focus on so-called market failures and, as I mentioned in one of my two sections, her work will help me provide a basis for evaluating the typical conclusions derived from analyzing the 'tragedy of the commons'.

PS: An interesting account of her work is found here.
Posted by constantine ziogas at 9:23 AM No comments:

5 Easy Steps to Stay Safe (and Private!) on Facebook

At last, some Economics...

First of all, apologies to those who have complained that nothing has been posted for quite a while. I am embarassed to say that the only reason was summer inertia. But, there is no better way to start the fall semester at school (and it is fallish today, even in Athens!) than to make a short post on the 2009 Nobel Prize in Economics.

Two economists shared the prize, Oliver E. Williamson and Elinor Ostrom. BTW, 'Elinor Ostrom is the first woman to have been awarded the Prize in Economic Sciences in its forty year history'. (look at her CV here - it makes you dizzy..)

I am familiar with Williamson's work but I have to confess that I was not familiar with Ostrom's (I felt much better when I found out that Krugman wasn't either!)

You will get a first idea on why these economists deserved the prize by reading this.

An interesting piece on their work was written by another Nobel prize winner Michael Spence (Markets Aren't Everything) (which I became aware of through Greg Mankiw's blog).

I promised my Tuesday class I would do some reading especially on Ostrom's work as it will be great when we discuss a bit later the Tragedy of the Commons.

This is from her Indiana University page:

How do we integrate the research findings in cognitive science into a workable set of models for exploring and explaining human choices in various institutional settings, including: social dilemmas, collective choice arenas, bureaucracies, and complex multitiered public economies?

How do institutions generate the information that individuals need to make decisions?

What biases or lack of biases are built into various ways of making collective decisions?

How are diverse preferences exaggerated or modified by interaction within diverse institutional structures?

For any ambitious IB Economics students around there, this is her paper :'Institutions and the Environment' (worth looking at to get a flavor).

Also, check out this 'supercourse': 'Beyond the Tragedy of the Commons'
Posted by constantine ziogas at 10:25 AM No comments: