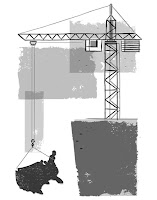 This is the link to the Robert Reich article I mentioned in class. Let me bring to your attention a couple of points:

Finally, not all deficits are equal. As every family knows, going into debt in order to send a child to college is fundamentally different from going into debt to take an ocean cruise. Deficits that finance investments in the nation’s future are not the same as deficits that maintain the current standard of living.

We had mentioned something along these lines when trying to evaluate the 'crowding out' argument.

The top 1 percent now takes home about 20 percent of total national income. As recently as 1980, it took home 8 percent. Although the economy has grown considerably since 1980, the middle class’s share has shrunk. That’s a problem not just because it strikes so many as being unfair, but also because it’s starting to limit the capacity of most Americans to buy the goods and services we produce without going deep into debt. The last time the top 1 percent took home 20 percent of national income, not incidentally, was 1928.

That's another potential problem with rising inequality in the distribution of income.

Enjoy the article here.
Posted by constantine ziogas at 9:50 PM