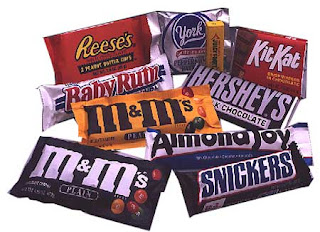 If tough times are here to stay for a while be prepared to gain a few kilos and add a few centimeters to your waistline!

The recession seems to have a sweet tooth. As unemployment has risen and 401(k)'s have shrunk, Americans, particularly adults, have been consuming growing volumes of candy, from Mary Janes and Tootsie Rolls to gummy bears and chocolates, particularly inexpensive ones, candy makers, store owners and industry experts say.

Many big candy makers are reporting rising sales and surprising profits even as other manufacturers are struggling to stay afloat. Cadbury reported a 30 percent rise in profits for 2008 while Nestlé's profits grew by 10.9 percent, according to public filings. Hershey, which struggled for much of 2008, saw profit jump by 8.5 percent in the fourth quarter. Lindt & Sprungli, which specializes in high-end products like Lindt bars and Ghirardelli, said that even though it expected to close its luxury retail stores in 2009, it would remain profitable because of strong chocolate sales through middle-class retailers like Wal-Mart and Target.

Booming sales in recession times is an old story:

There may be historic precedent to the recessionary strength of the candy business. During the 1930s, candy companies thrived, introducing an array of confections that remain popular today. Snickers debuted in 1930. Tootsie Pops appeared in 1931. Mars bars with almonds and Three Musketeers bars followed in 1932.

So, better be careful as summer is approaching fast!

The full article is here.
Posted by constantine ziogas at 10:55 AM