On the costs of pollution 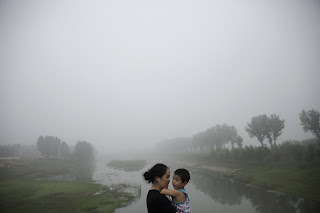 
'Air pollution is a problem for much of the developing world and is believed to kill more people worldwide than AIDS, malaria, breast cancer, or tuberculosis' (from Air Pollution in China: Mapping of Concentrations and Sources).

According to the new paper published by Berkeley Earth (with the NYT reporting the main findings here):

This translates to about 4400 people a day.  The air that many people breath is considered unhealthy by at least US standards.  The greatest health hazard is the fine air particles with a diameter of less than 2.5 micrometers.


According to the data presented in the paper, about three eighths of the Chinese population breathe air that would be rated “unhealthy” by United States standards. The most dangerous of the pollutants studied were fine airborne particles less than 2.5 microns in diameter, which can find their way deep into human lungs, be absorbed into the bloodstream and cause a host of health problems, including asthma, strokes, lung cancer and heart attacks.

The EPA here explains the issue with such particles:

"Particulate matter," also known as particle pollution or PM, is a complex mixture of extremely small particles and liquid droplets. Particle pollution is made up of a number of components, including acids (such as nitrates and sulfates), organic chemicals, metals, and soil or dust particles.

The size of particles is directly linked to their potential for causing health problems. EPA is concerned about particles that are 10 micrometers in diameter or smaller because those are the particles that generally pass through the throat and nose and enter the lungs. Once inhaled, these particles can affect the heart and lungs and cause serious health effects. EPA groups particle pollution into two categories:

• "Inhalable coarse particles," such as those found near roadways and dusty industries, are larger than 2.5 micrometers and smaller than 10 micrometers in diameter.

• "Fine particles," such as those found in smoke and haze, are 2.5 micrometers in diameter and smaller. These particles can be directly emitted from sources such as forest fires, or they can form when gases emitted from power plants, industries and automobiles react in the air.

If you haven't watched the documentary Under the Dome by Chai Jing, a former China Central Television journalist, please do so.  Ask your IB Economics teacher to watch it in class.  Here is part 1 of 8 from YouTube:

Obviously, the info above can be used in any Paper 1 (Higher or Standard Level) IB Economics essay on negative production externalities or on common access resources (the atmosphere).

Posted by constantine ziogas at 12:34 PM