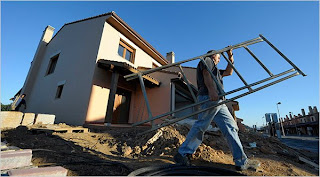 Some of you must remember that in class I had been questioning the sustainability of the Greek current account deficit figures we saw published week after week in the Economist. Anything over 5% or 6% of GDP is a threat and Greece was recording 10% all the way (more recently) to 15%. How could that be? Well, it was the Euro, stupid! But, the interest rates the Government has to pay 'investors' is now surging: the so called 'spread' is at 3% points (the difference between what the Greek government has to pay and what Germany has to pay for issuing debt).

But Greece’s problems are probably the worst. The country has been an easy target for the vigilantes of the European bond market, and recently it has been shaken by a wave of violent protests.

The omnipotent hand of the Greek state produced a public debt of more than 90 percent of Greece’s total economic output. The relentlessly rising demand of its consumers, who were able to put off the day of reckoning because they enjoyed the shelter of the low-inflation euro, has created a current-account deficit of 14 percent of its gross domestic product — estimated to be the highest in Europe.

This NYT article is not going to make you happy (if you are Greek, or for that matter, a Spaniard, Portuguese, Irish or an Italian).

Read it - I would say it is required reading: Once a Boon, Euro Now Burdens Some Nations
Posted by constantine ziogas at 8:26 AM