Mankiw: what has to considered when evaluating fiscal stimulus 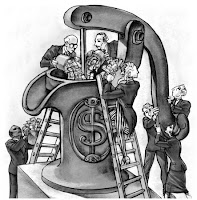 This is an editorial in the NYT written by Prof. Mankiw of Harvard. Prof. Mankiw is not so sure the fiscal stimulus plan (expansionary fiscal policy: increasing government spending G and/or lowering taxes T) that the Obama team is pushing for will do the trick. He raises some questions that any IB economics candidate should have in mind when evaluating expansionary fiscal policy.

The issues he raises include:
1. What is the size of the expenditure multiplier? Is it perhaps too small?
2. What will the Government spend on? We've mentioned in class that capital spending is the obvious choice but is 'a brigde to nowhere?' a good idea?
3. The tax multiplier is according to theory smaller (because part or all of the extra euro in our pockets following the tax cut may be saved and never spent). Empirical work though by Christina Romer (the new chief of the Council of Economic Advisors of President-elect Obama; Mankiw also held the position under Pres. Bush) finds otherwise...So, maybe tax cuts (the question is for whom?) should be also considered (and, they are)
4. Will this renewed interest in Keynesian interventionism lead us into other types of problems? This is the old question of what is the right balance between markets and the government...

The article is written in Mankiw's elegant and simple style (otherwise his principles textbook wouldn't have been as popular as it is and sell at over $200.00) and he is a (very) top notch economist.

For IB economics purposes just following Mankiw's and Krugman's blogs may be the best Macro preparation for the May exams.

The article's title is Is Government Spending Too Easy an Answer?. Read it. (please?)

PS: Check out this comment on Mankiw by Mark Thomas which includes reference to the latest paper/reply by Romer herself which became available only yesterday.
Posted by constantine ziogas at 2:33 PM