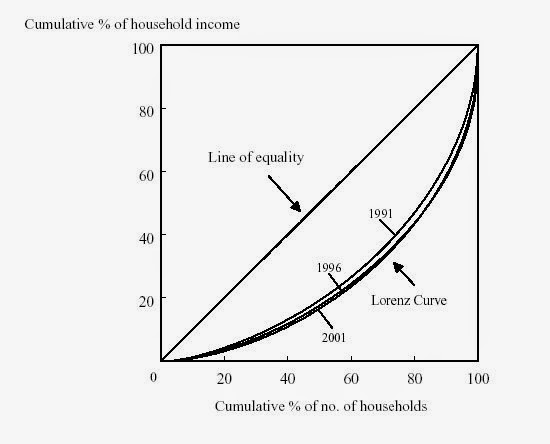 The second article from the October 4, 2014 issue of the Economist which I believe can be very useful for IB Economics students in their effort to understand the concepts & theories of the syllabus but especially to equip themselves with real world examples which they can effectively employ in their paper 1 essays is titled: The history of inequality Breaking the camel’s back What an impressive work of economic history tells you about inequality

It is a brief report on a new work by the OECD and the University of Utrecht 'How Was Life?
Global Well -being since 1820' which can be found here.

Quoting from the Economist article:


There is an exception to this generalisation, though: inequality. You would expect that the world of the Qing dynasty, Tsar Nicholas I and the British East India Company would be more unequal than today’s. Yet in China, Thailand, Germany and Egypt, income inequality was about the same in 2000 as it had been in 1820. Brazil and Mexico are even more unequal than they were at the time of Simón Bolívar. Only in a few rich nations—such as France and Japan—do you find the expected long-term decline in income inequality


And what about between nations?


What is true for individual countries is also true if you treat the world as a single nation.  The global Gini rose from 49 in 1820 to 66 in 2000. But this was not caused by widening disparities between rich and poor within countries. Inequality of that sort fluctuated for 130 years to 1950, before falling sharply in 1950-1980, in what the report calls an egalitarian revolution. Since 1980 it has risen again (as Thomas Piketty, a French economist, has shown), back to the level of 1820.

Also, the gap between rich and poor nations ('between-country inequality') has widened sharply:


The concluding paragraph is also telling as it wraps up findings on the effect of globalization on income distribution:


The above may come in handy when discussing several sections of the IB Economics syllabus.  For example:

Posted by constantine ziogas at 10:20 AM