A great article on the role of infrastructure spending in an economy... 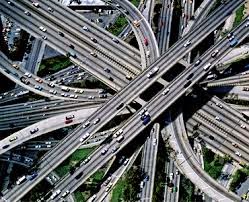 Long flights are great to read cover to cover the Economist!  Flying back home from Singapore provided me with such an opportunity.  I spotted at least 2 articles that may prove useful for IB Economics (HL and SL) candidates.

The first one is titled Concrete benefits: Public investments in infrastructure do the most good at times like the present' and is in the October 4th issue of the magazine/newspaper.

It is a primer on the role of infrastructure spending, complete with explanation and discussion/ evaluation and is it based on a new study by the International Monetary Fund, released as part of its half-yearly “World Economic Outlook”.  The whole chapter can be found here (and is worth skimming through at least) and the press release here (which is only one page).

Remember that a definition of infrastructure is 'physical capital, typically financed by Governments that lowers the overall production and transaction costs of firms and households as it is responsible for sizable positive externalities' (see my OUP Study Guide glossary on page 183 or any IB Economics textbook)

Public infrastructure is one of the few forms of government spending that both liberals and conservatives support. Ports, power lines and schools are essential to the smooth running of the economy. (But)... public investment is at the mercy of the fiscal weather. Cash-strapped governments are loth to pile on debt or raise taxes even for something as popular as a new road. After a burst of stimulus spending in the immediate wake of the recession, public investment has fallen back in the rich world.

This is profoundly short-sighted. That is the message of a new study by the IMF. It found that in rich countries at least, infrastructure spending can significantly boost growth through higher demand in the short run and through higher supply in the long run.


This is the first important point made:  the government expenditure will increase aggregate demand in the short term (as G is a component of AD) but will also shift to the right the LRAS curve as it increases the productive capacity of the economy, decreases overall costs of doing business and (as will be explained later) can lead to 'crowding-in' of increased private investment.

It continues stating that


...the results depend on how the investment is financed, how efficiently it is carried out and what the prevailing economic conditions are'

You realize that financing an increase in government spending can be through borrowing, through raising new taxes or by cutting some other public spending.  How it is financed is also of importance. It also matters whether the project is efficiently undertaken (if a 3-lane highway was financed but because of corruption and waste a 2-lane highway was delivered -as it has happened in Greece- or if the final cost of the project is double the initially budgeted/ planned cost, obviously the net effect on growth will be less).  Lastly, when the author writes that it also depends on the 'prevailing economic conditions' he/she implies how large or small the prevailing deflationary gap is i.e. how far/close from potential output the economy is operating.

The article also reminds us why such infrastructure projects are an example of a natural monopoly (thus there are microeconomic links from the syllabus):


Upfront fixed costs for infrastructure projects are typically high and operating costs relatively low. For these reasons, public infrastructure is often a natural monopoly: a city needs only one local telephone network, electricity grid or sewer system, so they are frequently publicly owned or regulated.

How about any multiplier related effects from the increased government expenditure?  Real world estimates are provided and the question of debt accumulation is also discussed:


On average, an unexpected increase in public investment equal to 1% of GDP boosted GDP by an underwhelming but still beneficial 0.4% in the same year and by a more impressive 1.5% four years later. The extra spending did not result in unsustainable debts; quite the opposite. Thanks to higher GDP, the debt-to-GDP ratio fell by 0.9 percentage points in the first year and four percentage points after four years

What if the 'new road' is financed through taxes?  Read on!


When investment is financed without borrowing—that is, with higher taxes or cuts to other spending—it has a small but still positive impact, which grows over time. The authors interpret this as evidence that even when public investment does not directly lift demand, it does so indirectly by “crowding in” private investment, for example by stimulating the  construction of houses and factories when new roads and water mains are installed. Private investment, the authors note, rises in line with the new, elevated level of GDP after a burst of public investment

And, if it is financed through borrowing (issuing new bonds)?

The above paragraph would be excellent to mention in an essay question asking candidates to explain the 'crowding out' effect or to evaluate expansionary fiscal policy!

This excellent article wraps it up by explaining why the time is right for most countries to go ahead and increase now infrastructure investment spending:


...the time is now optimal for more public investment. The added demand would be welcome since unemployment is still too high in most rich countries and interest rates near zero. The supply-side effects may also be considerable; declining public investment has led to a shrinking stock of infrastructure relative to GDP...

and, concludes with meaningful caveats:


Still, identifying a general shortfall in infrastructure investment is easier than working out what projects to spend extra money on. Of the seven biggest rich economies, only Germany and America have suffered a clear deterioration in infrastructure investment since 2006. And public investment is easily wasted on vanity projects such as football stadiums or inflated contracts with politically connected suppliers. Even in relatively transparent, democratic places such as America, with lots of bureaucrats to conduct cost-benefit analyses, identifying the most beneficial investments is hard.


Once again I'd like to stress the need for IB Economics candidates to include examples in their paper 1 essays.  The descriptors for attaining Level 4 marks (9 or 10 in part a and 13-15 in part b) explicitly require that 'examples are used effectively' by candidates.

Some 2013 IB Economics syllabus learning outcomes for which this article may prove handy include:

(BTW, it is amazing to me that nowhere in this Economist article is the name 'Keynes' to be found...)
Posted by constantine ziogas at 7:08 PM