The notes to my IB economics (HL) on the Phillips Curve

For whatever they're worth I am posting here the notes that I have prepared for my students on the Phillips Curve.

He collected annual UK data on the rate of unemployment and the percentage change in money wages for 96 years: 1861 – 1957 (money wage: whatever is written on your paycheck)

This inverse relationship between the annual rate of inflation and the rate of unemployment is referred to as the (original) Phillips curve. 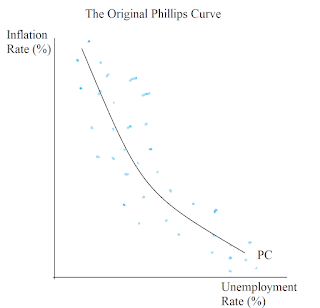 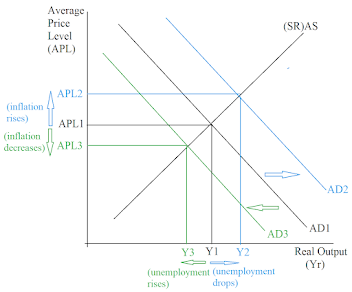 The original PC illustrated a trade-off between inflation and unemployment and if this relationship is stable through time for a country, then it was as if it presented policymakers a ‘menu of choices’: they could choose that combination on the country’s Phillips Curve that was considered the most desirable.

They even thought back then that they could ‘fine-tune’ the economy (which was of course considered by many as ‘hubris’).

BUT, in the early 1970s this ‘stable’ relationship between the rate of inflation and the rate of unemployment of a country collapsed.

Economies started witnessing something that was incompatible with the Keynesian model: BOTH the rate of inflation AND the rate of unemployment were increasing!  It was as if the Phillips Curve was shifting outwards (to the right).

This phenomenon was referred to as stagflation (=stagnation + inflation).

Arthur Okun (Okun’s Law: a 1% decrease in real GNP growth was associated with a 0.3% increase in unemployment) back then devised his Economic Discomfort Index — which Ronald Reagan renamed the Misery Index — the sum of the unemployment rate and the inflation rate.

This collapse was the result of the 1st oil crisis, as in 1973, OPEC to ‘punish’ the West  for supporting Israel, restricted the supply of oil and thus quadrupled overnight the price of a barrel of oil (think now of the price of natural gas surging given that Russia is restricting natural gas exports and its impact on European and other economies).

We now realize (with our  current AD and AS tools) that because production costs increased across the board, the SRAS decreased and shifted left leading to higher inflation AND higher unemployment.

MOST IMPORTANTLY, in 1968, Milton Friedman (the most renowned Monetarist; Nobel prize) published a most influential paper titled “The Role of Monetary Policy” where he introduced the term Natural Rate of Unemployment (NRU).

·        He claimed that if there is a trade-off between the 2 variables it exists ONLY in the short run; in the long run, there is only one rate of unemployment, the natural rate, which is compatible with ANY rate of inflation as long as this rate of inflation does not change (does not accelerate).  Thus, in the long run the Phillips Curve according to Friedman is VERTICAL at the NRU.

·        He included in his analysis ‘expectations’ about next year’s inflation that workers form à the ‘expectations-augmented Phillips Curve’ or, the “Phelps-Friedman Critique’ {Ed Phelps came up with pretty much the same analysis independently}

·        Workers thus suffer from “money illusion” i.e. they do not realize immediately that their real wage (the purchasing power of their money wage) decreased when inflation accelerated à their expectations of inflation are slow to adjust (‘adaptive’)

·        If the government tries to lower unemployment below the NRU using expansionary fiscal (and perhaps easy monetary), inflation will accelerate and workers will not immediately realize that inflation is higher than expected and thus their real wage has decreased: they will thus accept jobs offered by businesses who face lower real costs à unemployment does fall but inflation is now higher. 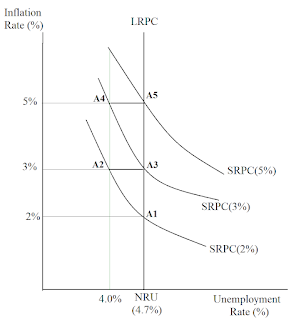 When expectations of inflation adjust (long run) so that expected inflation equals actual inflation, workers will demand higher money wages (remember that money wages are flexible fully adjust to changes in the APL in the monetarist model) until the real wage is ‘restored’ back to its original equilibrium level so that in the long run, unemployment will return to its natural rate BUT with higher inflation (this analysis is the ‘mirror image’ of the AD/SRAS/LRAS model explaining how an inflationary gap is closed in the Monetarist model – see the SG)

·        To maintain thus unemployment below the NRU with expansionary demand side policies a government would have to engineer ever accelerating inflation, which of course does not make much sense.

·        Friedman’s policy recommendation is thus: “Ms. Policymaker, do not try to lower unemployment below the NRU using expansionary policies; if you are successful, your success only will be short-lived (temporary) because workers’ expectations of inflation will [eventually] adjust and thus unemployment will return to its NRU but with higher inflation”

Long run: when expectations of inflation have adjusted so that expected inflation is equal to actual inflation.

Note that now in a part (a) essay asking to explain the NRU we now have three points to explain:

1. It is the unemployment that exists when the economy is at its potential level of real output

2. It is the unemployment that exists when the labor market is in equilibrium (see in the OUP Study Guide p. 92 the Dornbusch & Fisher LD/AJ/LF labor market diagram with the real wage on the vertical)

So many economists as unemployment was decreasing were afraid that if the Fed did not hit soon enough the brakes (i.e. start tightening monetary policy i.e. raising ‘r’), inflation would start showing its ugly face.

Janet Yellen, who was then the Chair of the Fed, resisted these calls and kept interest rates very low (continuing ‘quantitative easing’) à unemployment thus continued to fall, reaching a 50-year record low at 3.5% WITHOUT inflation exceeding the 2% target.[BTW, Yellen's successor, Ben Bernanke, today shared with two other economists the 2022 Nobel Prize in Economics]

Thus, thousands of American households found a job à if the Fed had tightened earlier, as several economists and politicians were insisting, many poor US households would have remained unemployed (on the other hand, quantitative easing [QE] increased income inequality as explained elsewhere)

Back then, many economists had started wondering whether the PC is ‘dead’, whether it was ‘hibernating’, why has it ‘flattened’ etc.

Explanations for the observed phenomenon varied. A couple of accessible to IB Higher Level Economics students include:

a.   Discouraged workers re-entering the labor market and finding jobs so that U, the numerator, in the unemployment statistic didn’t rise but the labor force number (the denominator) increased, decreasing the rate of unemployment {w/o need for firms to raise wages and thus prices to attract workers}.

b.   Expectations of inflation back then were well ‘anchored’ at the 2% target rate so that neither firms felt the need to raise prices, nor did workers feel the need to demand higher money wages: all stakeholders expected inflation to remain at 2%.

This explains why NOW, the Fed and analysts fear that inflationary expectations are ‘unmoored’ (=de-anchored) which, if true, implies that US inflation will continue to rise. A Central Bank must be credible – which is why Powell (the Chair of the US Fed) sounds so firm about the Fed’s intentions.  [many claim and they seem to be right that the Fed should have tightened monetary policy earlier - it was 'behind the curve']

PLEASE watch Aspen’s Roundtable on the US Economy and pay close attention to what exactly Neel Kashkari (President of the Federal Reserve Bank of Minneapolis) says:

Posted by constantine ziogas at 2:31 PM

Thank you for this post. Will be very helpful next term.