IB Economics: A Macroeconomics Primer - The BBC on the Turkish Economy 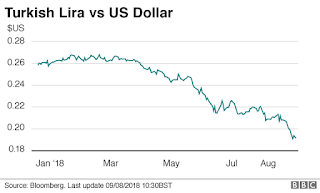 I was watching BBC a few minutes ago and there was a running banner (is that what it's called?) at the bottom of the screen reading 'Turkish economy heading for a crisis'.  I got curious so I logged on to BBC site and I found an article ('7 hours ago') with the same title: Is Turkey heading for an economic crisis?, by Andrew Walker, a BBC World Service economics correspondent.

I read the article and I immediately realized that it is perfect to discuss much of IB open economy macroeconomics with my class this fall.

First some of the reported facts:


The Turkish currency, the lira, has lost about 30% of its value against the US dollar since the New Year.

The stock market has fallen 17%, or if you measure it in dollars as some foreign investors would do, the decline is 40%

The central bank has an inflation target of 5%. A year ago, inflation was well above that, at about 10%. Since then the situation has deteriorated further with prices now rising at an annual rate of about 15%.

Unemployment is on the high side - the most recent figure is 9.9% - but it has been relatively stable.

In some respects the recent performance of the Turkish economy looks reasonable. It has grown every year this century apart from 2001 (the country's last economic crisis when it received an IMF bailout) and 2009 (in the aftermath of the global financial crisis). In some years growth has been very strong.

On the other hand:


(The trade) deficit has to be financed, either by foreign investment or by borrowing. In itself that is neither unusual nor dangerous. But Turkey's deficit is quite large at 5.5% of national income, or GDP, last year.

...Credit rating agency Moody's says that economic growth has been boosted to unsustainable levels by spending and tax policies. Policies for long-term growth have been sidelined, the agency says, given the focus on election cycles

...many Turkish companies have borrowed in foreign currency. Those loans become more expensive to repay if the value of the national currency declines - which it has.

Credit rating agency Fitch estimates that Turkey's total financing needs this year will be almost $230bn....  Even borrowing in dollars is expensive for Turkey at a cost of around 7%


There is an obvious policy option open to a central bank that wants to bear down on inflation - raising interest rates.  That can curb inflation in two ways. It can weaken demand at home, and by increasing financial returns in Turkey encourage investors to buy lira - which strengthens the currency and reduces the cost of imports.  What bothers the markets is the president's well known - and most economists would say, ill-informed - opposition to higher rates.

Turkey is also at risk from developments in the US. The Federal Reserve continues to raise interest rates, which encourages investors to pull money out of emerging markets.


Could there be more to discuss in one article?


Posted by constantine ziogas at 1:10 PM