In the first part of this post (August 12) I focused on my so-called 'Type A' candidate, a 'candidate who is aiming to achieve a 6 or a 7 in Economics and to study in a top university after graduation'.  This candidate was very well versed in theory, had practiced a lot of essay writing but often was not able to achieve top marks in a P1 essay, i.e. achieve even Level 3 or especially Level 4.  From my experience, this was either the result of poor time management and/or of not embedding their response within a real world context.  They would define, draw, explain and discuss beautifully, but, often,  all of their work was "in a vat" i.e. they never related it to the real-world.

I define Type B IB Economics candidates as individuals who have not studied much and, most importantly, have not practiced much essay writing.  How can one help these guys?

One thing that I have been doing for many tears is to hand out (to all of my students) my file with all past IB Econ essay questions (the file goes back to 1998 for the HL essays and to 2005 for SL).

If these essays are grouped together by syllabus section or, even in much smaller syllabus chunks, (say, all essays that relate monopolistic competition or even, to why in monopolistic competition firms earn only normal profits in the long run; or, all essays that relate to unemployment or, just to structural unemployment) then, (interested; a sine qua non condition) students, realize that question setters really have a limited choice set!  There is only so much variation that the learning outcomes of our syllabus permit.

For example, let us look at two groups of questions:

Focusing now these, what is the crux of these questions?  What does the examiner expect for sure?

Well, all these questions Group I deal with how free (competitive) markets manage to allocate scarce resources.  I would suggest that the answer in a nutshell relates to the signaling and incentive roles of prices.  Without these two terms, the question cannot really be answered (in my opinion, at least).

What terms should one necessarily define?  I think that it would be a good idea to define resources, allocation of resources, a free (competitive) market as well as demand and supply.

Which diagram?  A simple demand and supply diagram pertaining to some specific market with the demand shifting to the right following an increase in demand for this product. 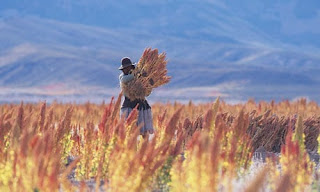 How about the real-world example?  I encourage my students to use a great example (again, in my opinion), the case with quinoa.  Quinoa was/is a staple food of the populations of the Andes which became very fashionable to eat in the US and later Europe and Asia when an American TV persona, Oprah Winfrey, made it known to her zillions of viewers. Quoting from the Economist:


In 1993 a study by NASA, America’s space agency, stated: “While no single food can supply all the essential life-sustaining nutrients, quinoa comes as close as any other in the plant or animal kingdom.” But it took adulation from the likes of Oprah Winfrey (who in 2008 included it in her 21-day “cleanse” diet) to give the grain global appeal. Now, wherever yuppies can be found, it can be too, usually lurking near Puy lentils or goji berries in a salad. (see Quinoa: Against the grain)

Demand for quinoa, in other words, increased dramatically!  Its price started rising, and candidates have to explain here the ‘signaling’ role (that this increase in price emits information to market participants) and then to explain the ‘incentive’ role  (that producers as a result of higher profit margins have the incentive to offer more quinoa -extension of supply- while some consumers cut back or drop-out - contraction of demand…blah, blah, blah).

Eventually, the new equilibrium Q is greater than the original one and, since you can’t produce something out of nothing, more scarce resources (land, workers, machines) are channeled into quinoa production.  The end.  But, this example is great, as of course (…see the articles below for a nice story that can be used to illustrate tons of econ concepts)

So, it may be a good idea to ask candidates to:

Now, for the Group II essays.


What is the answer in a nutshell to pretty much all of these?  I think that the examiner expects candidates to explain how entry of new firms (or, also, exit of some existing firms) in such a market ensures that in the long run monopolistically competitive firms earn only normal profits.

What terms should one necessarily define?  I think that one must define carefully a monopolistically competitive market (and within this, define differentiated product using a couple of examples as well as barriers to entry) and provide a couple of generic examples.

Which diagram(s) should one use?  Well, I think that one definitely needs to carefully draw a monopolistically competitive market where the firm in focus makes supernormal (abnormal) profits (i.e. positive economic).  This would illustrate the short run equilibrium position.  And, then of course, one where this monopolistically competitive firm is making only normal profits (and define this term correctly – see below) i.e. zero economic profits. This would be the long run position (one could draw also the case of losses BUT…see below). 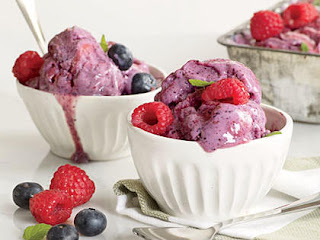 How about the real-world example?  Well, I would suggest that students narrow down the generic example used to an actual real-world example they are aware of.  For such questions I guide my students to a specific restaurant-café market in the northern suburbs of Athens where there were initially only few firms, but their number has increased (and somewhat, stabilized).  Or, I like the story of the frozen-yogurt fad in my city where the number of sellers surged and then, when the fad was over, it decreased and seems to have also stabilized.  Any food market in any (US) mall could also help or the food stalls in many cities around the world.

So, my advice to my Type B kids:

So, these guys must during the last couple of months have outlines for the limited number of essay groups they come up with.  Teachers may of course facilitate the process.

There is, unfortunately, in many schools, a third type of candidates.  These guys may go through the 2 DP years doing almost no work.  I am usually fortunate enough not to have such a group (even though occasionally, there is a kid who can rightfully claim membership…). In this case, I have been forced to focus mostly on macro (as it has significantly fewer essays to worry about): unemployment, inflation and growth (perhaps, somethings on income distribution that may even be useful for P3).  Perhaps also on a few micro topics (like comparing PC and monopoly; pollution; alcohol). And, then pray a lot!

Issues I have seen related to the concept of economic profits in the IB:

Normal profit is defined as the minimum return a firm (an entrepreneur) requires to earn to be willing to remain in the present line of business.  This minimum is equal to what this firm (these resources) could have earned in the next best alternative with the same risk.

It follows that supernormal (or, abnormal) profits are any profits above this minimum.

If supernormal profits exist, then other firms (entrepreneurs) will want to take advantage of this opportunity and try to enter this market (here: role of barriers).

If more firms do enter then:
(a) in the PC setup, the market supply increases (shifts to the right), decreasing the price and squeezing economic profits down to zero.  If losses exist (so firms are making less than what they could have earned in their next best alternative), then exist will decrease market supply, raising the price until no more firms have the incentive to exit

(b) in a MC setup, since there is NO supply curve, the induced entry of new firms will “shrink and tilt” the demand that the incumbent firms face for their product (decrease and flatten it - i.e. make it more price elastic as consumers face more and closer substitutes) until these supernormal profits are competed away.  With losses, the opposite, of course.

Kids always ask why is it that firms making normal profits i.e. zero economic profits are willing to continue to operate?

They must understand that normal profit is an element of economic costs, as normal profits represent the minimum required to be earned to secure the 4th scarce factor of production, entrepreneurship!  Remember, to secure the scarce factor ‘labor', wages have to be paid and all realize that wages are an element of cost!  This is a point of course that requires quite a few examples (and, some time…) but, in the end (usually), candidates really understand the idea and its implications.  So, one cannot define normal profits as zero economic profits!  This is just a condition: if economic profits are zero, it means that the firm (the entrepreneur) is earning the minimum required to remain in this line of business!

Lastly, concerning the trade-off mentioned above on whether to include a 3rd diagram in the Group II essays.  Diagrams must be drawn in the same manner as in a Grand Prix, Ferrari car mechanics change tires: very fast and very precise.  But, in my experience, students take longer than necessary.  So, I would advise against using (drawing) a 3rd diagram and, instead, briefly explaining that if there are losses, then exit will take place until supernormal profits are competed away.  The opportunity cost of drawing a 3rd diagram may be too high and not worth paying it.

PS: Some interesting articles on the quinoa story include: Quinoa brings riches to the Andes, Overproduction and Consumption Threatens Andes Superfood Haven, The Quinoa Boom Goes Bust in the Andes


PS2: Interested IB Economics teachers can access my files with all past IB Economics essays (for HL Economics and for SL Economics) at MyIB.
Posted by constantine ziogas at 5:09 PM