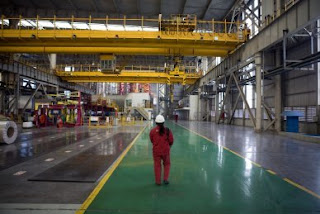 This one is from today's Herald Tribune and it relates to trade, macro and development economics.

It is happening faster than most anyone predicted: China's economy, long the world's fastest-growing major economy, is slowing down. Economists are forecasting that after growing nearly 12 percent last year, China's economy could slow to 5.5 percent in the fourth quarter of this year — a stunning retreat for a country accustomed to boom times.

Last week, banking regulators began warning about the risk of bad loans accumulating, and labor officials publicly worried about the possibility that mass layoffs would lead to unrest.

"It's the speed of the deceleration that scares people," says Liang Hong, a Goldman Sachs economist who said she recently surveyed companies in China.

The American recession is one big reason China's epic economic growth is imperiled: as Americans buy less, China sells less. And China's own efforts to keep its economy growing, through a stimulus package worth nearly $600 billion, may not replace a falloff in American demand as the United States' recession deepens.

The global downturn is already reaching deep into the heart of the country's once-rapid industrial transformation — its steel, cement and construction companies — stalling dozens of multibillion-dollar investment projects. Plunging housing prices at home combined with a virtual global investment freeze have led to steel orders softening, steel prices plummeting, and inventories and losses piling up.

In America, consumers have closed their wallets. Parts of Europe are already in recession. And in Asia, Japan and Hong Kong now say that they too have slid into recession.

The ripple effects are being felt everywhere in China. Hard-hit airlines and automakers have appealed for government aid. Local governments that raised millions of dollars auctioning off land rights are confronting lower bids and depressed sales, which essentially means lower tax revenue.

This is not getting any better. Remember the Roubini post a while ago?

Daniel Altman's post in his Managing Globalization blog 'Evaluating the $7 trillion bailout' is worth also reading.
Posted by constantine ziogas at 11:16 AM