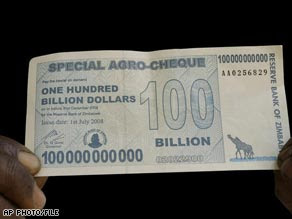 Well, we know that if the inflation rate exceeds (usually) the 3% mark, Central Banks get nervous and typically respond by tightening monetary policy.

Zimbabwe's inflation rate has soared in the past three months and is now at 11.2 million percent, the highest in the world, according to the country's Central Statistical Office.

Think of possible solutions. Remember that you need to consider the particulars: we're talking of Zimbabwe, an African nation, that has been in the news very often lately...

We also learn from the article that price controls don't seem to work:

Official figures dated Monday show inflation has surged from the rate of 2.2 million percent recorded in May, despite the government's price controls.

Replacing the Central Bank with another monetary authority that would strictly control the money supply had been proposed by U.S. economist Steve Hanke:

Hanke says that in order to halt its hyperinflationary spiral, Zimbabwe must replace the Reserve Bank with a new monetary regime imposing discipline on money supply

A discussion of solutions can be found at the Marginal Revolution blog here.

Some of the costs of hyperinflation are mentioned in this Guardian June 07 article when inflation was only 4,500%:

Hyperinflation is spreading poverty, as even basic goods become unaffordable. Supermarket trollies lie idle as few can afford to buy more than a handful of goods. Government regulations only permit the withdrawals from banks of Z$1.5m a day, which is not enough to buy a week's worth of groceries.

Golfers pay for drinks before they set off on their round, because the price will have gone up by the time they have finished the 18th hole. One Zimbabwean was recently told by a pension company that it would no longer send him statements as his fund was worth less than the price of a stamp.

"I can barely cope with inflation in the thousands, but millions? We will die," said Iddah Mandaza, a Harare factory worker, who added that some workers were now saving on transport costs by "going to their jobs on Monday and sleeping at the workplace until Friday. They all share their meals. That's what they do to get by."

Many Zimbabweans are resorting to bartering. "I traded some soap for two buckets of maize meal [Zimbabwe's staple food]. It was far much better than trying to buy it in the shops," said worker Richard Mukondo. "People in the rural areas are even worse off. You can see they are hungry and their clothes are in tatters. They trade in whatever they can produce: tomatoes, onions, chickens and eggs."

How bad then can a mere 4.4% be? Well, this is the latest figure for Greece and, trust me, it is pretty bad. Remember the particulars!
Posted by constantine ziogas at 5:23 PM