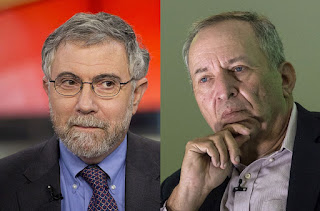 Larry Summers is a most respected Harvard economist (check out here his very impressive cv – BTW, he entered MIT at 16!)  who has lately been very much in the news as he fears that inflation is knocking on the US economy’s door as a result of a the $1.9 trillion Biden American Rescue Plan.

Interestingly, Summers had re-introduced in 2013 a depression-era term, ‘secular stagnation' to describe the slow growth, low interest rates and no sign of inflation that characterized the US and other advanced economies (see his article titled “Accepting the Reality of Secular Stagnation” in the March 2020 issue of “FINANCE & DEVELOPMENT” a free publication of the IMF that all IB Economics students should subscribe to; link to Summers F&D article here).  He then claimed that “it may have become all but impossible to boost growth by using the age-old trick of lowering interest rates to encourage more investment and consumer spending. The answer, he argued, was for governments to spend more instead” (see this article in The Conversation here; see also this Summer's article.

But, today, it was perhaps Mr. Summers’ Washington Post February 4 article "The Biden stimulus is admirably ambitious. But it brings some big risks, too" that started the debate about whether as a result of the increased government spending there is risk of inflation now in the US. He explained why in his opinion this risk is real:

“First, unemployment is falling, rather than skyrocketing as it was in 2009, and the economy is likely before too long to receive a major boost as covid-19 comes under control. Second, monetary conditions are far looser today than in 2009 given extraordinary Federal Reserve policies, the booming stock and corporate bond markets, and the weakness of the dollar. Third, there is likely to be further strengthening of demand as consumers spend down the approximately $1.5 trillion they accumulated last year as the pandemic curtailed their ability to spend and as promised further fiscal measures are undertaken.”

He pressed further in a May 24 Washington Post article  “The inflation risk is real”  where he wrote:

“Fed and Biden administration officials are entirely correct in pointing out that some of that inflation, such as last month’s run-up in used-car prices, is transitory. But not everything we are seeing is likely to be temporary. A variety of factors suggests that inflation may yet accelerate — including further price pressures as demand growth outstrips supply growth; rising materials costs and diminished inventories; higher home prices that have so far not been reflected at all in official price indexes; and the impact of inflation expectations on purchasing behavior. Higher minimum wages, strengthened unions, increased employee benefits and strengthened regulation are all desirable, but they, too, all push up business costs and prices.”

But the US was in need of expansionary fiscal policy. So what is Summers' policy advice? He specifically asks: “So how best can we (the US) contain overheating risks and promote sustainable growth while also making necessary investments in infrastructure, greening the economy and helping low- and middle-income families?". He explains:

"First, starting at the Fed, policymakers need to help contain inflation expectations and reduce the risk of a major contractionary shock by explicitly recognizing that overheating, and not excessive slack, is the predominant near-term risk for the economy. Tightening is likely to be necessary, and it is critical to set the stage for that delicate process....Second...unemployment benefits enabling workers to earn more by not working than working should surely be allowed to run out.  Third, it is essential to make long-term public investments to increase productivity and enable more people to work" (his point here is to have redirected a big chunk of the Rescue Plan to (long-term) public investments).

On the other side of the story, we find a most prominent name, Paul Krugman, the 2008 recipient of the Economics Nobel Prize (also a most impressive CV - click here)

Krugman argues for a while now that the rise in the rate of inflation is not to worry much about.  He considers that the size of the American Rescue Plan ($1.9 trillion) was necessary.  He explains here  in his revived blog that this plan should not be confused with typical expansionary fiscal policy initiative to close an output gap as this was not “a conventional recession — a decline in output due to insufficient aggregate demand”. He further explains that the size is not too big, given the circumstances; and, that there may be some risk of overheating but this risk is small and can be controlled by the Fed (the US central bank) tightening policy (i.e. increasing interest rates).

A February 2021 YouTube debate between Summers and Krugman can be viewed here (longish- but try to watch until 40:48 ). You may find a summary here)

Krugman’s most recent (June 21, 2021) New York Times article is titled “The Week Inflation Panic Died” (see here). He had been arguing that there are two types of inflation: “The key thing to understand is that there are really two kinds of inflation.”  The one type is ‘hard-core’ inflation which is when inflation becomes embedded in the economy (i.e. in the expectations of firms and workers) and then “transitory inflation...which is easy come, easy go” and policymakers should “worry only if core inflation looks as if it’s getting too high (or too low)”, i.e. if it becomes embedded in expectations.  He continues: “The Fed has been arguing that recent price rises are similarly transitory. True, they’re not coming from food and energy so much as from pandemic-related disruptions that caused surging prices of used cars, lumber and other nontraditional sources of inflation. But the Fed’s view has been that this episode, like the inflation blip of 2010-11, will soon be over.  And it’s now looking as if the Fed was right. Lumber prices have plunged in recent weeks. Prices of industrial metals like copper are coming down. Prices of used cars are still very high, but their surge has stalled and they may have peaked. Core inflation wins again.”

I'd like to add that I have been relying a lot for my IB Economics classes (when classes were not virtual...) on podcasts.  One that is very relevant (and, easy to understand) is this Post Reports podcast (June 17, 2021) Inflation, inflation, inflation (listen only only up to 12:50 for this issue; a must for IB Economics students).

One last point: if the US central bank (the Fed) is forced to increase interest rates because the Summers' scenario of inflation materializes and manages to do so without staring a recession, then there is an interesting benefit for the US economy: it will once again be able to lower interest rates (from say 4% to 1%) to fight a future recession.  The Fed now faces the ZLB (zero lower bound) constraint: with interest rates pretty much at 0%, there is virtually no room for cutting interest rates as deep negative interest rates are considered 'unchartered territory' (but if interested, see Rogoff's idea here)

Hope this provides some background information for investigations that you may conduct on several macro issues that may feature on an IB P1(b) econ exam.

PS: Concerning the distinction between 'embedded' inflation and transitory inflation (or 'blips' as Krugman refers to them in one of the above articles) we can realize why inflation (in the IB and not only) is defined as a 'sustained increase in the general price level'.  See for example Ellie Tragakes' excellent textbook, p.309. Unless inflation is considered sustained (i.e. at risk of becoming embedded in expectations), a central bank (like the Fed now) will not increase interest rates.

Posted by constantine ziogas at 12:46 PM