Krugman in the New Yorker 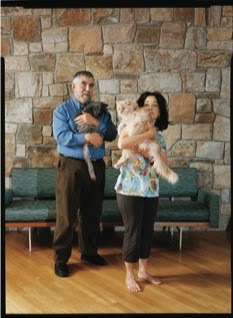 (in the picture, Krugman and his wife, Robin Wells, at home with their cats, Doris Lessing and Albert Einstein...(!))

....In recent years Krugman has also spent a great deal of time distilling his views into an undergraduate textbook. When he first signed the contract to write it, in 1994, he did it mostly for the money. Then he did no work on it for years. Finally, his publisher told him that he had to get moving, that he should work with a co-author who was better organized and more highly motivated than he was, and suggested his wife. It took them five years of intense work to write the first edition.

“You have to put yourself back in the mind of an eighteen-year-old,” Krugman says. “And it has to be impeccable. If you’re writing an academic paper, if you have some stuff that’s blurrily written, that won’t do too much harm. If you write a newspaper article and a third of the readers don’t get it, that’s a success. But a textbook has to be perfect.”

Even though they were doing it mostly for the money, they knew that, for the students who read it, their textbook might be the only time in their lives that they were exposed to proper economic thinking, which of course would have an influence on their political thinking.

“The books we’re competing with tend to be much more rah-rah about the market,” Wells says. “That’s partly because that reflects the views of the author, but also because it’s easy to do it that way—you just find where the lines cross and everybody’s happy. It’s more difficult to talk about how markets fail.”

“The trend when we were putting the latest edition together was to have less and less about the business cycle, and we said, ‘No, this is wrong, the business-cycle sections are still important,’ ” Krugman says. “That turns out to have been a really good bet.”

“We were the only textbook that incorporated the financial crisis, as we were chronically late. We were supposed to have the manuscript delivered in August or September, and by October we were still working, and we just said, ‘We can’t send it out like this, too much is going on.’ We were really in nail-biting territory, because you have to get it to the printers by a certain date or you miss the academic year.”

“We were right in the middle of that when the Nobel Prize committee called, and Robin’s reaction was ‘We don’t have time for this!’ The stress of the week or so after the announcement was crazy, so we actually went off to St. Croix. We were working frantically.”

Fun reading about the life of a Nobel Prize guy. Click here.
Posted by constantine ziogas at 8:51 PM